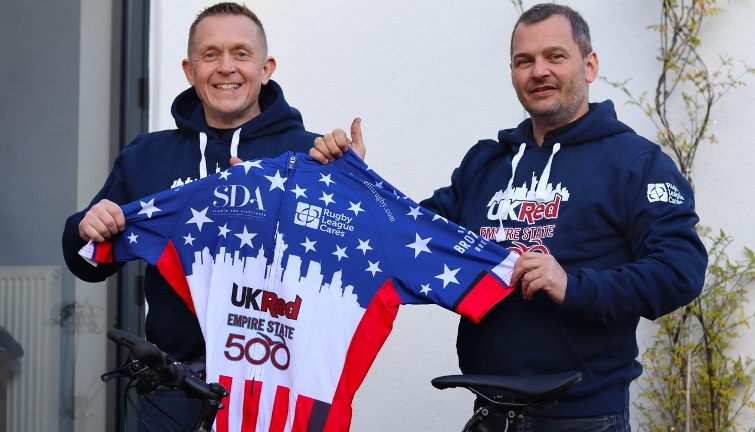 It’s taken a while to come around again with the whole pandemic.

I’m older and need to train harder for this one than before. It’s not my first ride at a distance, but it’s bigger, tougher a whole 150 miles bigger and with more of a reason than ever before!

I’m not a natural cyclist, so it hurts every time. I like pies and cakes, so I have to work hard to make it happen.

The reason I’m doing this is to support RL Cares. The charity reaches out to current and former RL players and their families to support them through tough times. England international and a hero of mine, Rob Burrow, eight times Grand final winner for Leeds Rhinos, was diagnosed with MND. They provide support in times of need.

On 5th June 2022 a team of 20, including former RL stars will be Cycling 530 miles from Niagra Falls to Central Park in New York (not Wigan’s Tesco supermarket. For 6 days on the saddle. My previous furthest has been 380 miles, so it’s going to hurt.

Not only is there a chance the 530 miles will kill me, but there’s also added risk of being eaten by bears. So please all donate as generously as possible.

P.S. Just so you know, this won’t be a holiday! It’s going to be physically and mentally tough. I’m not getting any younger, so every morning will break me. Added to the fact I’ll be paying all my own expenses. So every money will go directly to the charity.

Many thanks for your continued support.

We use cookies on our website to give you the most relevant experience by remembering your preferences and repeat visits. By clicking “Accept”, you consent to the use of ALL the cookies.
Cookie settingsACCEPT
Manage consent

This website uses cookies to improve your experience while you navigate through the website. Out of these, the cookies that are categorized as necessary are stored on your browser as they are essential for the working of basic functionalities of the website. We also use third-party cookies that help us analyze and understand how you use this website. These cookies will be stored in your browser only with your consent. You also have the option to opt-out of these cookies. But opting out of some of these cookies may affect your browsing experience.
Necessary Always Enabled
Necessary cookies are absolutely essential for the website to function properly. These cookies ensure basic functionalities and security features of the website, anonymously.
Functional
Functional cookies help to perform certain functionalities like sharing the content of the website on social media platforms, collect feedbacks, and other third-party features.
Performance
Performance cookies are used to understand and analyze the key performance indexes of the website which helps in delivering a better user experience for the visitors.
Analytics
Analytical cookies are used to understand how visitors interact with the website. These cookies help provide information on metrics the number of visitors, bounce rate, traffic source, etc.
Advertisement
Advertisement cookies are used to provide visitors with relevant ads and marketing campaigns. These cookies track visitors across websites and collect information to provide customized ads.
Others
Other uncategorized cookies are those that are being analyzed and have not been classified into a category as yet.
SAVE & ACCEPT
Request a Call Back